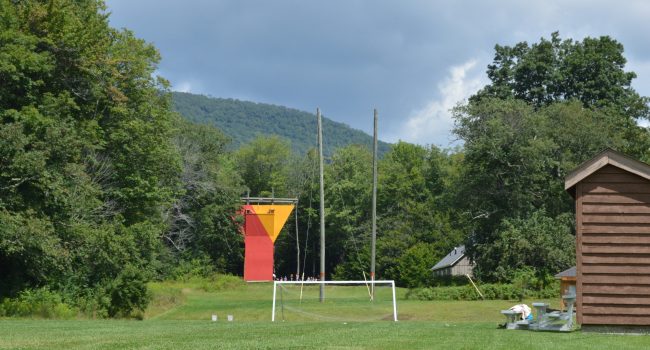 Danielle Andruszkiewicz sits in the archives of Frost Valley, sorting through old photos, maps, and memories of time spent in the valley.  It allows her to reminisce of her time at Frost Valley and the impact it has made in her life.  She began coming to Frost Valley in 1973 when she was 13 years old and called it her summer home for years, doing everything from being a counselor to a nurse’s aid.

After years at Frost Valley, Danielle attended Springfield College and returned to camp in the summers as the Wellness Director, working with Frost Valley legend, Joy White. Upon graduation from college she moved on to be the Aquatics Director at the YMCA of Stamford, Connecticut, where she later married her college sweetheart, Pete. They recently celebrated their 35th anniversary, with their four children by their sides.

Although Danielle has had many different jobs throughout her life, her line of work always remained focused on children and wellness, including her time as a personal trainer, and working with babies in the NICU.  She enjoys hiking in the Catskills and recently hiked Rim to Rim in the Grand Canyon.

After years of living in different parts of the country, Danielle has returned to Frost Valley, splitting her time between Claryville and Fort Myers, Florida. In addition to her time volunteering with Anna Morelli working on the history of the Y, Danielle and Pete are both Claryville Volunteer Firefighters and have participated in several search and rescues and other emergencies in the area.

Throughout her life, the one thing that remained constant in Danielle’s life is her connection to the Y. Her start at Frost Valley as a young girl helped her realize the magnitude of the organization, and the importance of camp. It has changed her life as she has watched it changed countless others.  Along with the numerous things she learned during her time at Frost Valley, Danielle still often says a saying that she learned from Joy White – “Honey, this isn’t a dress rehearsal.” And that is how she continues to live her life today.