You are here » frostvalley.org » Frost Valley News » Bob Haines is inducted into the Hall of Fame 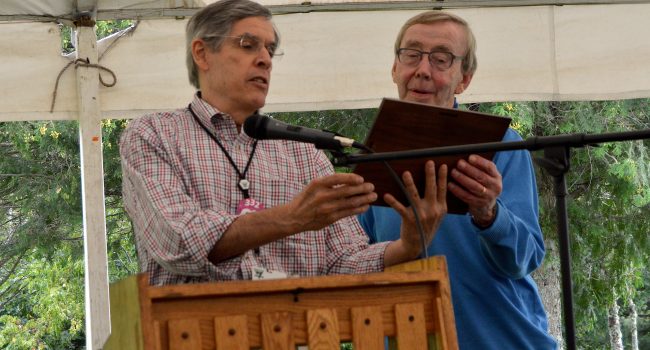 Bob Haines is inducted into the Hall of Fame

Here is the program note marking Bob Haines’s induction into the Frost Valley Hall of Fame:

When recently asked about his experience as a Frost Valley trustee, Bob Haines characteristically avoided talking about himself and his own work, saying that what most impressed him was the high ethical and intellectual quality of the other board members. Yet, paradoxically, this is precisely why his colleagues this year unanimously voted to induct Bob into our Hall of Fame: it is because his selfless spirit of giving, combined with his rigorous sense of good self-governance and of balances and procedural checks; his belief in carefully written standards and regular order; his strenuous stance on conflicts of interest; his very high standard of the trustee’s obligation and responsibility; and his notion that he personally succeeds as a board member only inasmuch as the entire group collaboratively succeeds—have been fundamental drivers toward the remarkable success of Frost Valley YMCA as a duly constituted, values-driven organization.

Jerome Wolf, an original trustee of Frost Valley and a legendary Y leader, knew Bob Haines would be a great addition to the community. In the midst of a successful, busy legal career as a partner at Herold & Haines in Warren, New Jersey, Bob joined the Frost Valley Board in 1997. Since that time he has contributed thousands of hours of legal and other counsel. He has opined on the wisdom or foolishness of land sales, proposals for annexations, rights deals, outsourcing, loan partners, and investments in new programs. He has laid his exacting semantics- and logic-sensitive eyes on nearly every document drawn up. “Bob’s sage wisdom,” Jerry Huncosky recently said, “is called upon often—to affirm that our plans are logical, legal, and sustainable. In fifteen years, he has never disappointed me with his intellect.”

Bob also led the initiative to modernize the trustees’ bylaws. And for years he led the Committee on Trustees, with its chief mission of positive self-governance—a special hallmark of Bob’s interest and talent. He has served on the committee that annually reviews the CEO and has often offered the persuasive case for why that conversation is so crucial to Frost Valley, even (perhaps especially) in years when all is going perfectly well and such talk might seem to be pro forma—for, to Bob, trustees simply must be called upon regularly to articulate their ultimate responsibility for the organization even when that responsibility might seem superfluous. Bob prepares us for the moments when we must lead—and when we do lead it must be through transparent processes and good order. Bob Haines, in short, has made us conscious stewards of Frost Valley.

From the moment he became a trustee, Bob advocated for the centrality of endowment and planned giving. The success of the Neversink Society—its members have made planned gifts through wills, annuities, and estates—is largely owing to Bob’s efforts. There is no more effective way of assuring Frost Valley’s future, Bob contends, than the building of a substantive endowment and the engagement of significant numbers of donors willing remember Frost Valley in their wills. He led the board’s endowment subcommittee and saw that fund pass the $10 million mark a few years ago. The appeal for further endowment gifts goes out under his name. 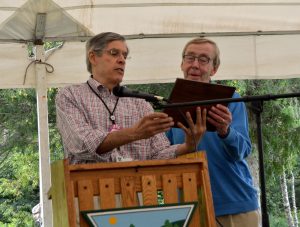 For his decades of leadership as a trustee of Frost Valley; for his selfless contribution of hours upon hours of wise counsel, in calm and in crisis; for his consistent modeling of ethical action, due diligence, and self-aware planning for the future stability of our service to children and families; for his unwavering belief in the power of endowment and planned giving as means for guaranteeing that future; for his gentle, persuasive reasoning & his always ready smile—we today induct Bob Haines into The Frost Valley YMCA Hall of Fame.