You are here » frostvalley.org » Group and Family Programs » A Boy’s Dreams Take Flight 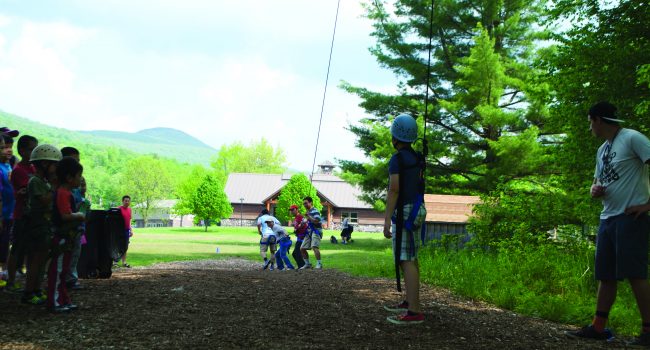 What began as a missed opportunity, has transformed the life of a young boy named Michael, who has autism. Many public schools on Long Island take school trips to places in upstate New York, and Michael’s district schedules their trip to Frost Valley for their 5th grade classes each year.

He had been looking forward to the trip for several months, but when the time came Michael was unable to attend with his class. He was extremely sad when he realized that he was going to miss his chance to go to Frost Valley because he had been hearing about it and thinking about it all year long. Knowing how disappointed he was, Michael’s father, Gary, decided to take him to Frost Valley himself.

Gary called to make the arrangements. That’s when he learned about Frost Valley’s Autism Support Weekends. Frost Valley offers many of the outdoor activities that Michael enjoys during these weekends, so he was excited to bring him.

Gary learned about the Flying Squirrel, a high ropes challenge where children are hoisted up into the air and get to “fly” with the support of a harness, pulley system of ropes, and the muscle power of additional kids who help provide the leverage for liftoff. Michael was over-the-moon thrilled at the prospect of “flying” like Super Grover (his favorite Sesame Street character).

He had an absolutely incredible, joyous time on the Flying Squirrel. “I can’t tell you how many times children literally get to have their dreams come true, but I can say with certainty that my son’s dream came true that day at Frost Valley,” Gary described in a letter to Frost Valley.

After witnessing his son having the time of his life, Michael’s family decided to return for another Autism Support Weekend. When they arrived the following year, they were pleasantly surprised to discover that both of the staff members who facilitated the Flying Squirrel were the same ones from the previous year.

Not only did they remember Michael, but they also greeted him by name and told him how much fun they had helping him with the Flying Squirrel the year before. Gary fondly recalls, “I can’t begin to imagine how many guests they interacted with both before and after our first trip to Frost Valley, yet they remembered Michael. To this day (four years later), they still remember him.”

Now Autism Support Weekends have become a frequent getaway for Michael’s family. Not only has Michael’s life been positively affected, but his family’s lives have as well. They have formed strong bonds with several other families that they spend time with at these retreats year after year. Caring for a son with Michael’s unique needs can be isolating, but these Autism Weekends allow families to meet others who can relate.

The families book adjacent cabins so they can make campfires, roast marshmallows, make s’mores, and enjoy beautiful nights stargazing together while sharing stories of their lives. Michael also made a lifelong friend at Frost Valley who just so happens to live on Long Island as well.

Gary explains, “Michael and his new friend see each other at many of the weekend activities and Michael is always eager to talk with his good friend. This is more than a friendship; it’s a milestone for my son because making friends is by no means easy. I could not be more thrilled and I have Frost Valley to thank for it!”

In addition to the numerous activities, many of which emphasize being outside enjoying the beautiful landscape, there are several programmatic features of these weekends that are designed specifically for families affected by autism spectrum disorder. Frost Valley creates exclusive time slots at various activities just for families attending the Autism Support Weekend.

This keeps the size of the group manageable and ensures that none of the children wait too long, as this can be extremely challenging for some. Gary raves, “The programs change from year to year, so even though it’s been four years, we still haven’t done everything yet.”

Frost Valley provides a sensory room for families who can benefit from having a calming, secluded space. Additionally, Frost Valley designates a quiet room inside the dining hall for families since ambient noise can become an especially challenging distraction for some.

Gary was initially concerned about what (and if) his son would eat while staying at Frost Valley because he can be a picky eater, but they were very pleasantly surprised by the many healthy choices offered. A vegan option is always offered at every meal, as well as plenty of kid-friendly choices.

Gary knew of other families in their area that could benefit from attending one of Frost Valley’s Autism Support Weekends and he decided to take action. Gary recounted his wife’s advocacy, saying, “She is very involved with a community of families who have a child on the spectrum here on Long Island. She has been busy spreading the word about our family’s great experiences at Frost Valley!”

What began with one family’s desire to fulfill their son’s longing to visit Frost Valley, turned his dream of “flying” into reality and created lifelong friendships. Now, one family’s positive experience has spawned a network of families who come together to share laughter, bond over common challenges, celebrate triumphs, and share their dreams for the future.