You are here » frostvalley.org » Group and Family Programs » Farm Camp to the Rescue!

Farm Camp to the Rescue!

Today we became super heroes and saved Farm Camp from a mysterious evil force that was trying to destroy us!  Turns out it was our counselors! We were able to save camp!  We trained all day, with sports and games, creating our costumes, designing our emblems, and finding our chi in nature.  We also wrote our super hero stories.  Here are a few of those stories and some pictures!

I remember that I was at my local fair with my younger brother, Joey in the year 1962.  The fair has been coming year after year for as long as I remember.  Its a joyful thing with food like cotton candy, popcorn, candy apples, lollipops, and cracker jacks.  And there is always a Ferris wheel that spins round and round to show us all around Brooklyn.  This year I was 13 and my brother was 10.  We came to the fair and I made him wait in line for an hour while I got cotton candy.  But, when I got the the front of the line, there was none left! So I took my brother to get some popcorn, but there was none left!  The rest of the fair was miserable.  While we were walking home, we decided to go back to the fair after dark to search for cotton candy and popcorn.  We arrived late but the fair was not quite packed up so we went to see the supplies.  And sure enough there was one left of each!  So we ate them and went home. And the next morning I woke up in the future, 2013.  But, I had the power to turn villains into cotton candy…

They call me Rainbow Man. Years ago I was a normal person going  for a stroll when KABLAMZ — I saw it.  The most amazing rainbow ever revealed to mankind (woah).  I ran towards it in slow motion until I realized that it was getting higher and higher into the sky. Shortly after, I realized I too was rising into the sky.  The rainbow and I got closer and closer until I was blinded by its color, and when I could see again, I was sitting on a rainbow lawn chair in some rainbow clothes and kicks and in my hand was a rainbow note.  It said: “You are the King of Rainbows now. It is your job to rid the world of evil using your complete control of all things rainbow.  You have been given the gifts of rainbow teleportation, fatally bright rainbow beams, rainbow transformation, and of, more pots of gold than you know what to do with.  Peace out, the rainbow people.”  I now travel the world fighting crime and training a team of Rainbros with my sidekick and oldest apprentice, Captain Fabulous.  They call me the Rainbow Man, and this is my story. *Rainbows out of here* 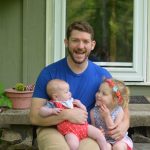 Growing up in New Jersey, Dan Weir knew Frost Valley YMCA as the place his family loved. Now Dan has 21 summers working at Frost Valley YMCA under his belt. He has progressed from junior camp counselor to Director of Camping Services, overseeing Frost Valley’s overnight summer camp programs. Dan holds a Master’s Degree from Stony Brook University, specializing in youth development and technology affecting youth, and a Bachelor’s Degree from George Washington University in Psychology. Dan lives year round at camp with his family.