You are here » frostvalley.org » Overnight Camp » Camp Henry Hird » And so it begins!

What an exciting, hot day here today at Frost Valley! Second session means Olympix, which is an incredibly action packed two days of outrageously loud fun. Today at lunch we had our coach reveals – a coveted position among the staff. The reveals are notorious for being just the beginning celebratory kick off for the event, and there is a lot of singing and dancing involved. This year happens to be one of the most diverse years of Olympix teams we’ve had in so long, with India, Italy, Uganda and Jamaica just to name a few! Olympix is not only about what team cheers the loudest, (although the spirit award IS the grand prize!) it is also a wonderful opportunity for the International staff members Frost Valley has to show off their cultures to us all through dances, songs, cheers and games! 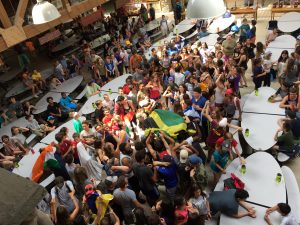 Here, you can see all the staff and campers of the Hird celebrating together as the coaches had just been revealed! 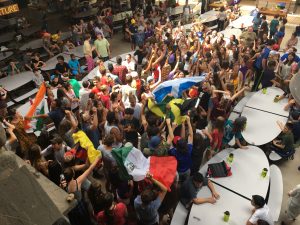 The fun didn’t end there though! Our youngest villages on camp, Sacky and Hemlock, had their overnights! Unfortunately, a storm did pass over us in the late afternoon which meant the overnights had to be brought indoors – but like any positive spirited groups they made the absolute best of the situations! When I caught up with Sacky they were just finishing up their pita pizzas, and doing some indoor bonding activities like playing cards, making friendship bracelets and chatting with one another. 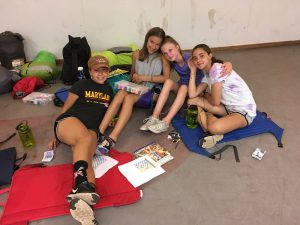 Look at all those smiling faces! Even in the stormy weather the girls could not contain their excitement for being with one another. Hemlock village had a real treat today when they celebrated not one, but two birthdays at lunch! The look on both campers faces when both Sacky and Hemlock belted out Happy Birthday to them was so adorable! Just look at these beaming faces! 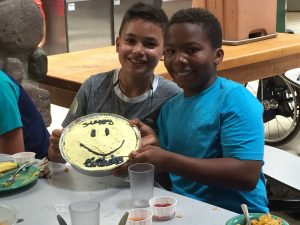 Celebrating a birthday at camp is a unique and special privilege! Plus, cake!

Next, I caught up with Tacoma village as they participated in my personal favorite camp activity this afternoon, Ultimate Turbo Kickball! The game originates with Adventure Village – a separate program on property that has campers ages 8-15. Essentially, the game is just a messy version of kickball but with mattresses. I’m sure you are trying to figure out what this looks like exactly, well each base is a mattress covered in either mud, glitter, or paint. Once the ball is kicked, the kicker has to run and slide onto each mattress, thus covering themselves in whatever the surface is covered in! It totally captures the essence of summer camp – messy, goofy, active, games! Plus, where else would you find yourself diving into a mattress of mud or paint or glitter, am I right?! All in all, an extremely active day but that is summer camp! So much more to come!