You are here » frostvalley.org » Overnight Camp » Camp Henry Hird » Coming Together For Activities In The Hird 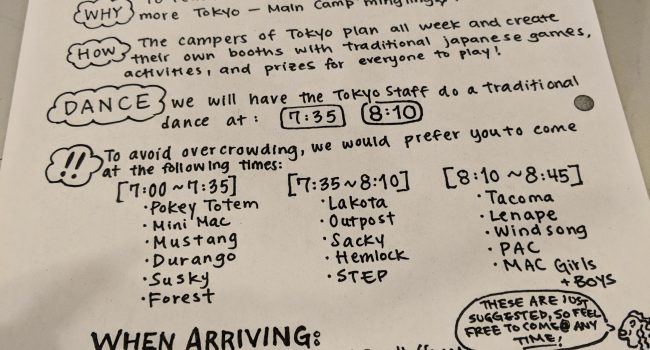 Coming Together For Activities In The Hird

Today at camp saw a lot of the Hird villages team up and do activities together. Tacoma and Lenape joined together this morning to do some exfoliating facial scrubs and mediation. Campers kept telling each other to ‘treat yo self!’ which made me laugh.

After lunch Tacoma and Sacky played some beat the clock charades together. Campers are divided into teams and have a time limit to get their teams to guess what topic they have been given by the counselors. It is a wild, fast-paced activity with lots of laughs at the funny guesses. The afternoon also saw Pac join MAC Boys to make Banana Boats.

Something that had everyone hyped was the arrival of invitations for Tokyo Night. Tokyo night is a culture sharing event that is hosted by the campers and staff from our Tokyo Partnership. They teach the campers from Hird and Wawayanda about Japanese culture and games. It is one  of the highlights of the summer. This year it will happen next Tuesday so be on the lookout for a blog post with pictures on Tuesday night. Below is a photo of the invitation. 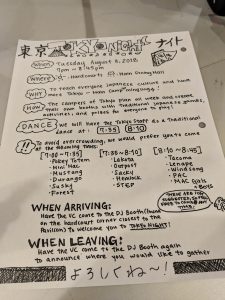