The sun was out and the laughter could be heard all around camp. The Hird villages were all around camp keeping busy. Pac and Windsong took some time together to learn a traditional cheer that they do at the last Hoopla of the summer. They get to do the last cheer of each session from our Upper Solarium that oversees the Dining Hall. This cheer only happens once a session so it is a very special way for them to finish out their last Hoopla as a camper. 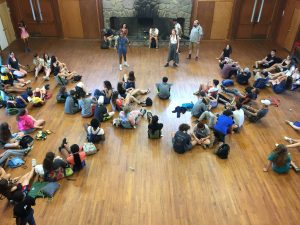 Another exciting thing that happened today was Hird Waterfront (and Waterfront Specialties) getting a visit from our Healthy Snack Wagon! Once a session our campers get healthy homemade snacks delivered to them. Today had a large variety: There were frozen grapes and healthy brownies as well as ice pops made from banana, pineapple, and coconut milk or watermelon and sage. Streams of campers and staff could be seen running back and forth between the Snack Wagon and the Waterfront. 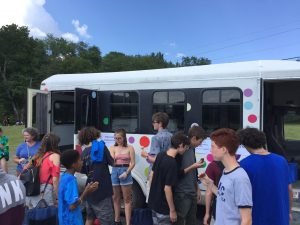 For anyone who didn’t know, we also give our campers choices away from the Waterfront at that time called Specialties. One of the specialties offered today was soccer! The activity was taught by one of our staff from Scotland who recently was awarded a scholarship at a university in Canada for soccer playing so there was some awesome learning moments involved. 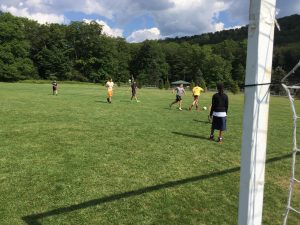 Our evening programs tonight were two camp favorites. The first was Ultimate Sicko Ball which is a variation on capture the flag. Held at a Frost Valley landmark, Big Tree Field, USB as it is known is a large game which involves 4 quadrants and 4 teams. The campers know their teams ahead of time and dress in their team colors before dinner. There was a lot of running and spirit involved! 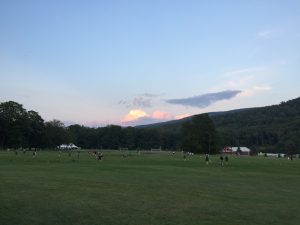 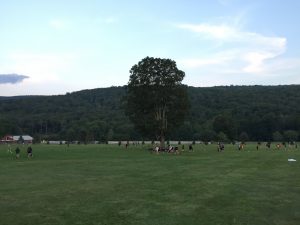 Sacky and Hemlock took part in Challenge Night with Al tonight. They were joined by Pokey Totem (our youngest campers) as well as MAC Boys and MAC Girls. The picture below took part during our lookalike contest when two campers from each team who aren’t related come up and whoever looks the most alike wins. 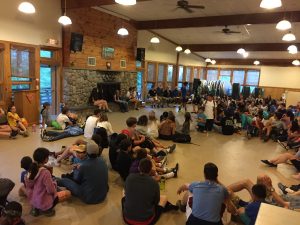 Tomorrow is a busy day, with a lot of packing, celebrating, and finishing with a closing campfire that stays with campers all year.