Yesterday was the first full day of session 2 and it was great! The sun was shining and everywhere you went, villages were learning cheers and playing games. We joined Sacky in the morning for the camp’s favorite game, Geronimo. In the afternoon, everyone was at the waterfront doing their swim tests and splashing around in the water. The picture below is some campers who got their green swimming tag (meaning they can swim in any of the areas) and Hannah who went into the lake with all her clothes on! Here’s to a fun-filled second day. 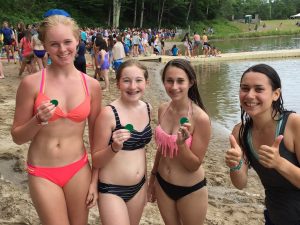