Session three is officially under way and we could not be more excited (and shocked that we’ve gotten this far into the summer already!) As the old saying goes, time flies when you are having fun, and can I just say, we are having an incredible amount of fun here in the Hird.

Typically the first days are much more informational than the others, but that doesn’t mean we ever stop having fun! I caught up with our youngest campers, Sacky and Hemlock, as they learned cheers. During every lunch here at Frost Valley, we have an activity called “hoopla” in the dining hall, where each village shouts their respective cheers. They’re sometimes a little sassy, but always incredibly creative and include every camper in the village. Most will have some form of foot work, or clapping to keep the rhythm; make sure to ask your camper to share their favorite hoopla cheer when they get home! 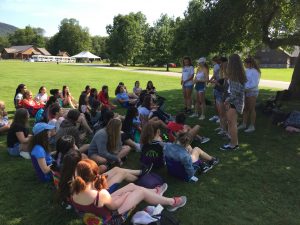 Later on in the day, I caught up with Windsong as they played a camper favorite – Geronimo! Geronimo is a game whose origins stem directly from Frost Valley, with a trustee and former camp director who is still incredibly active in the community, Al Filreis. The game is like musical chairs with many twists; rather than music, you follow a system of various names, numbers and character traits that will prompt you (or anyone playing the game!) when they should get up and switch chairs with anyone else who shares those traits, some of todays prompts was wearing braids or have a sibling entering college in the fall! 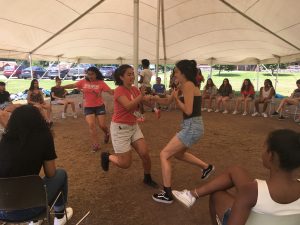 The game can end up getting a little wild – but in a chaotic, silly, goofy way! Which definitely embodies the spirit of summer camp!

We look forward to all the memories we’ll be creating and sharing throughout the course of the session! Make sure to keep an eye out for all the fun we’ll be having, including but not limited to overnights, challenge nights, lots of basketball, and some messy activities as well!