Healthy Snacks, Performances, and Going With The Flow

Today was a wonderfully wild day at Frost Valley! Sacky started their day by doing some Facespiration (inspirational face painting) as a group. Some of the designs were very detailed. While that was happening Hemlock were taking part in song sports, combining music with lots of traditional sports.

In the afternoon all of the female villages (Sacky, Tacoma, and Windsong) played paint dodgeball getting messy and active at the same time (you’ll notice some paint in the blog pictures today). This was followed by a visit from our Healthy Snack Wagon. The snack was ice pops made from natural fruit juices and yogurt, they were a huge hit. 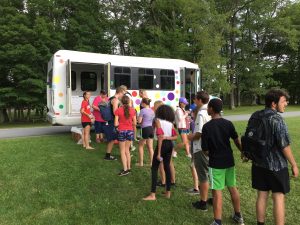 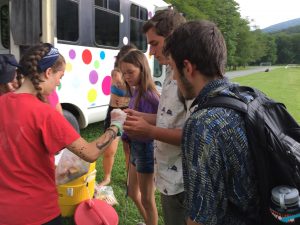 With some rain in the afternoon our plan for evening program of Ultimate Sicko Ball (A mix between capture the flag and other big group games) was put on hold due to slippery conditions. We were lucky enough to have some great indoor activities instead. Most of the Hird took part in an old program called Hirdaplooza in the Dining Hall. This was a great opportunity for campers to showcase their performance skills for their peers (the picture below is of a Tacoma camper doing a stand up act!). 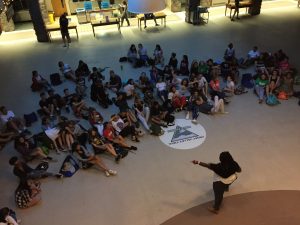 Sacky and Hemlock had challenge night with Al, a camp favorite that all the Hird villages have done this session. 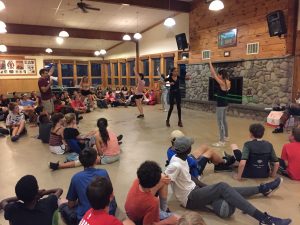 Everyone is gearing up for the last full day of Session 1, full of laughing, campfires, and making memories.