It’s here! It’s finally here! Morgan and I are thrilled to welcome the final batch of Hird friends for summer 2016. After settling into their cabins, our Hird campers played introduction ice breaker games and enjoyed square pizza for dinner. At 8:15, we all met on the castle lawn for opening campfire and watched as the counselors performed skits, sang songs, and introduced themselves. The Hird was lucky enough to have a guest appearance from the one and only Bud Cox (former summer camp staff member and all around legendary Frost Valley icon) as he did a rendition of his “Lion Hunt” song. Tonight the Hird will return to their cabins and have their first devotion as cabin groups to discuss the expectations our campers and counselors have for the next two weeks. For first time readers, devotion is a calm activity period before bedtime where the cabin winds down after a long day of camp. Tomorrow is going to be fantastic! 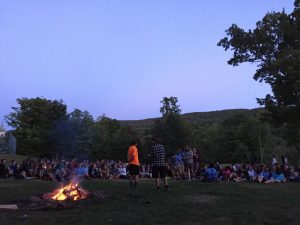