You are here » frostvalley.org » Overnight Camp » Camp Henry Hird » It’s a Small World After All!

It’s a Small World After All!

How has it been a full week since the first session of summer camp has begun!? Sundays work a little differently at camp; campers sleep in until 10 AM and have a meal brunch style rather than a breakfast or lunch. Brunch is an extra special treat not only for the ability to sleep late, but because there is an ice cream station in the middle of the dining hall proclaimed “The Island of Dreams.” Anyone can choose between either vanilla or chocolate ice-cream to have on top of their waffles THEN topped additionally with chocolate syrup, whipped cream and sprinkles (or whatever combination of their choosing.)

After all the sugar has been consumed, campers have an extra long rest hour that lasts 2 hours rather than one. During this time, campers have the chance to spend more time with their peers and counselors, and embody the spirit of an easy Sunday.

Then, at 2 PM, the fun really began! We celebrate July 4th with a festival called “Small World” which begins with a staff soccer game, USA vs. International Staff. Following the soccer game, international staff members set up booths which represent their home countries! This summer was an extra special treat because we had so many new countries we had previously not experienced, such as Italy and India! It is an amazing way for the campers to learn about different cultures, and a great way for international staff members to broaden our understanding of the countries they call home! 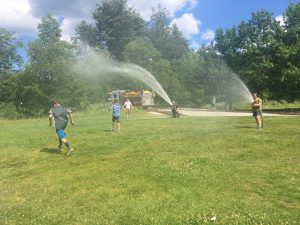 Additionally, the local firemen come to camp and bring a giant hose to spray anyone who wants to participate! It is so incredibly silly and loads of fun! Typically, staff members will have small games, art, or sometimes even food – this year the staff members from Mexico had chips and guacamole at their booth, but they went so fast I couldn’t even get a photo!

After dinner, we have a talent show where campers have a space to exhibit the talent of their choosing, and then for the grand finale – a fireworks show!

Sundays are arguably the best day on camp!