You are here » frostvalley.org » Overnight Camp » Camp Henry Hird » Sunshine and Smiles in the Valley

Sunshine and Smiles in the Valley

Today was a beautiful day in the valley, and not just the weather! There was a lot of inter-village mingling and shared activities including a large group games of Gladiator between Lenape and Hemlock (think a lot of dodgeballs and pool noodles), Zumba with Sacky and MAC Girls, and a huge (and I mean huge!) game of Geronimo with Tacoma and MAC Boys. There was excitement and energy as both villages swapped chairs, used the bonker stick, and played games of swot (ask your camper all about Geronimo, chances are that they’ll play it while they’re here). 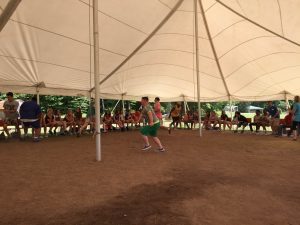 We also had our 2 oldest villages, Windsong and Pac, leave on their overnights. They both left together and had lunch as a large group before splitting for their separate overnight sites. We’ll have pictures on the blog of both groups at their beautiful overnight spots tomorrow so stay tuned!