It has been a whirlwind of two days here at Frost Valley – which is why we’re jam packing this blog post with not one day of activities, but two!

The Hird has been moving all over the place; between theme days, night swims, challenge nights and swap days just to name a few! We’ll start it off with PAC village playing a Frost Valley favorite activity, Geronimo! Started and run by a past camp director and incredibly active alumni in the Frost Valley community, Al Filreis. 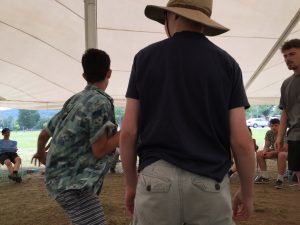 The game resembles musical chairs in a way, but progressively gets more difficult (involves a combination of names, numbers, traits depending on the group; ask your child about it, they’ll be so excited to explain!) Each village plays it at some point in the summer! 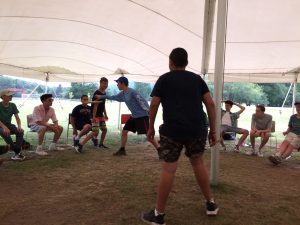 Later on, we caught up with Sacky Hemlock on their overnights! Each session, campers experience a night under the stars, and get to sleep outside! Typically, the overnights happen around camp and within 20-45 minute hikes. The campers get to help staff members build a fire where they’ll cook their own pizzas on pita bread – another yummy camp treat, until they make s’mores. Some campers in Sacky decided to build small shelters using random logs, sticks, branches, leaves, and pine cones they found around their site. 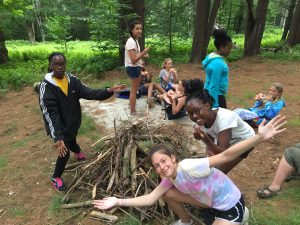 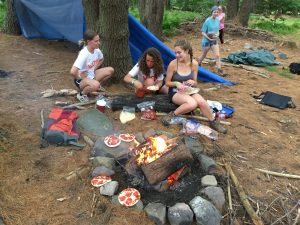 While the campers in Hemlock kept it a little more casual; either playing cards, a game called Magic which involves its own specific set of cards and rules (similar to Pokemon) or lounged out in their sleeping bags to relax after their walk to the campsite. 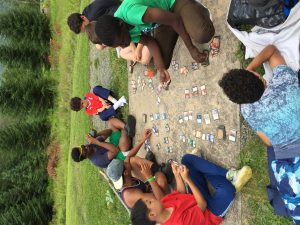 And lastly, Tacoma Lenape took part in one of the best evening activities on camp (arguably); a night swim. As the sun sets on another beautiful day in the Catskills, the campers take in the scenic landscape while swimming, playing basketball in the “sports” section or bouncing on the water trampoline! So much fun! 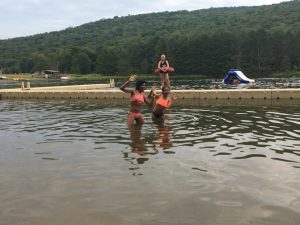 Today was just as action packed; Hemlock had an NBA draft theme day. Each co-counselors represented a different team in the league, and they held a village wide mock draft for each camper. Throughout the course of the day they held drills, technical trainings, and made jerseys! Here they are practicing for the big game to take place as their evening activity. 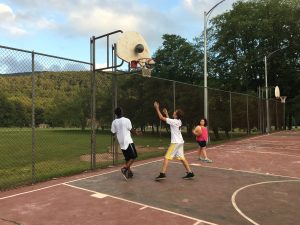 While PAC and Windsong participated in another one of our camp favorite activities run by Al, challenge night! Al’s challenge nights are famous for their wacky categories and bringing campers of all ages together! Tonights challenge night brought together not only PAC and Windsong, but MAC Boys, Adventure Village and our youngest campers on property, Pokey Totem! It was wonderful to watch the way children of all ages, and incredibly diverse villages came together to support one another (and enjoy ice cream at the end!) 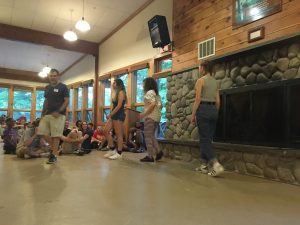 Here they are participating in a rousing round of Simon Says!

We cannot believe that session 1 is coming so closely to an end! Look for our final few blog posts in the coming days!