Hard to believe it is already the second Tuesday of third session! That fact didn’t stop us from having awesome new experiences – as always.

This morning I caught up with some Lenape campers as they had a tour of the Raptor Center on camp. Our Raptor Center is especially unique, as all the birds in it are being rehabilitated or would not be able to survive in the wild, so we house them here! Our most famous bird is Gilboa, an 18 year old owl that attracts most of our attention. She is incredibly docile though, allowing us to not only touch her soft, silky feathers but also the area around her mouth which has feathers that are so airy and soft! 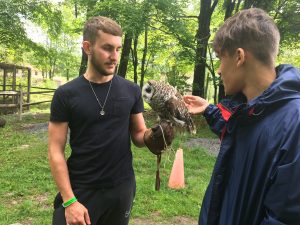 Later on, I caught up with most of the Hird female villages as they participated in a paint dodgeball fight! Although the paint ran out relatively quickly, we still enjoyed ourselves in the beautiful weather by playing the classic game of coke and Pepsi. 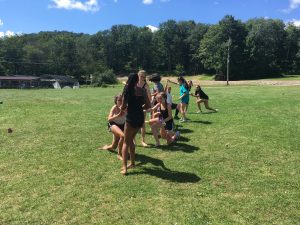 Tonight on camp was a much sought after event called Tokyo Night. The night is run by the campers and staff from our Tokyo partnership, and it is spectacular! There are traditional Japanese games, little booths set up where staff members are painting names in Japanese, Japanese pop music is played, and the staff does a dance that is based off fisherman catching fish in Japan! It is a magical night of culture sharing that only happens once a summer at Frost Valley! We are so lucky! 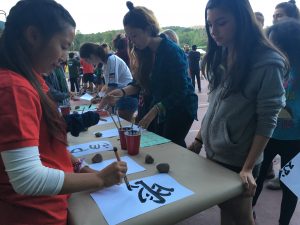 We are having a wonderful time here and so grateful the weather has been holding up so spectacularly for us! Looking forward to all the memories we’ll share with you when we see you!