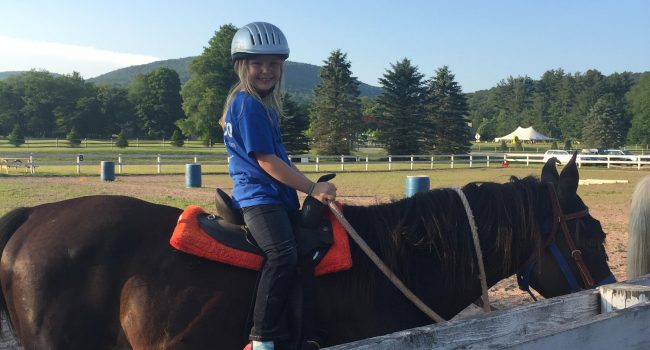 Mustang and Durnago are all unpacked and have settled in great to camp. On check in day the campers took part in name games and had the opportunity to introduce themselves to their cabins. We joined the rest of Wawayanda who are the younger campers at Frost Valley for a pizza dinner, before heading to opening campfire down by Lake Cole. The campers enjoyed learning new songs and enjoyed laughing at the skits that the counselors had prepared.

Yesterday was the first full day of camp and the campers spent time playing games allowing them the opportunity to continued to get to know each other. The first part of the morning the campers spent down at waterfront were they had their swim checks. They spent time splashing and playing in the water until they headed up to lunch.

Before riding the campers went on a hay ride along our Neversink trail. They enjoyed learning and singing new camp songs and also seeing the ponies in the field. Down at the barn the campers got to ride for the first time. They all had their evaluation rides that gave the opportunity for the barn staff to see which horse should be paired up with each camper for the session. They all were super excited to be down at the barn and enjoyed there first riding lesson at Frost Valley. After riding they had their first ground lesson on how to lead and to tie a horse, groom and also how to tack up the ponies.

Mustang and Durnago have a full week of activities and the girls and boys are super excited to meet their horses and to get started on the riding lessons.