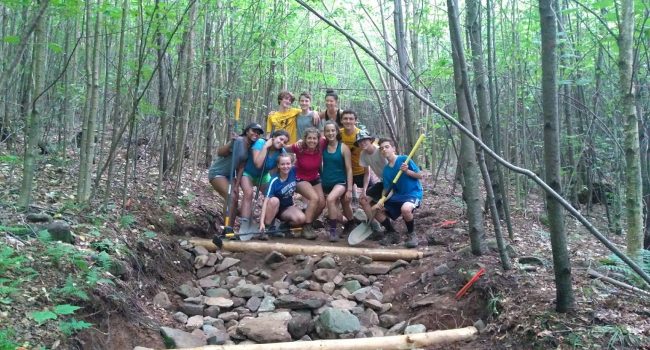 Frost Valley YMCA’s Counselors in Training (CiTs) have been assisting the organization’s Natural Resources Department with a trail restoration project on the camp’s Top Wildcat Trail. The largest part of the project involves building stairs for improved accessibility to the trail. The area where they are working has become severely eroded over the years, resulting in a U-shaped depression in the earth with steep banks on either side funneling water and furthering the erosion. To correct the initial issue of waterflow, the Natural Resources staff first built a large rock water bar above the damaged area to divert water off the trail. When the first group of CiTs arrived, they began restoring the damaged area. The CiTs peeled bark off of logs, dug out indentations in the banks, and set the cut logs horizontally across the trail, perpendicular to the direction of travel. Next, they began back-filling the area behind the logs with large rocks and then topped the stairs with packed dirt to serve as the trail tread.

Frost Valley’s Natural Resources department has completed two weekends of work with four CiT groups. Two weekends are left and they are halfway done with the restoration project. The project has been so successful and popular that other groups are asking to assist in the repair. Wrangler in Training (WiT), from Frost Valley’s equestrian camp at East Valley Ranch, will be helping with the same type of restoration on another section of the trail next week.

Once completed, this project will accomplish a plethora of goals, including preventing further erosion on the trail, making the trail easier to traverse, allowing 4-wheelers to access farther up the mountain in case of an emergency, and enhancing the aesthetics of the trail. The CiTs have surpassed the staff’s expectations, are working hard, and keeping their spirits high, even after completing a five-day hike!