You are here » frostvalley.org » Overnight Camp » Camp Wawayanda » Having a wicket time at cricket!!!!!

Having a wicket time at cricket!!!!!

Today one of our International counsellors, Jay from England shared his love of cricket with his Forest campers. Every year Frost Valley hires staff from all over the world and this year approximately 30% of our seasonal staff are Internationals. This Summer we have hired from South Africa, Croatia, Ireland, Scotland, England, Wales, Brazil, Columbia, India and Mexico to name but a few countries.

Diversity is a core value here in Frost Valley and we believe there’s no better way to learn about diversity than to experience different cultures first hand and we encourage our counsellors to pass on their love of their own countries traditions, sports and games. We do this  in many ways like in session one we have a whole day dedicated to celebrating other cultures in an all camp tradition we call “Small World”. In session 2 we have the famous frost Valley Olympix, where campers become part of a team from one of 8 countries and over two days campers learn about that country and compete in games and tasks as a nation. It’s incredible to see campers embody the spirit of a country that they may have never even heard of before and it definitely incorporates all of the core values of Frost Valley.

Today, the Forest campers had a blast playing cricket, some for the first time ever! It went down a treat and it’s already been requested as a game to play during hangout later on. Let’s hope the rain stays away! 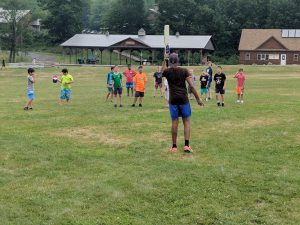