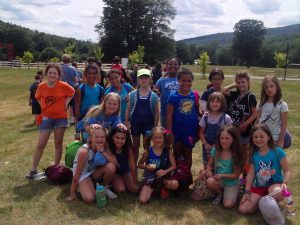 The girls loved creeking so much last week that I scheduled it out again for yesterday! They went to the river again and were experts on rock painting by the end of it! They explored up and down the creek and also built rock towers by balancing rocks of all shapes, sizes, and colors on each other. It was a hot day so the cool river water was very refreshing. They headed off to waterfront after creeking and were able to completely submerge and swim around in the lake.

The evening activity was theater games with two other villages! They were so excited to get involved with other villages. They fooled around doing acting games, and traditional camp games. The girls were happy to hop in bed after the lively activities.

Today we played one of my favorite camp games. It is called Geronimo and it is run by Al Filreis, a camp legend. Al got everyone involved and was happy to have both Mustang and a cabin of our Tokyo partnership program participating together! This was the first time that Mustang and Tokyo programmed together, and the first time that the Tokyo campers played Geronimo! It was a morning full of firsts!

We had waterfront once again and today was even hotter! It was also humid which made us not quite realize how hot it was outside! The water was very reviving to those who were hot in the morning. They were all set for riding in the afternoon after they had had a dip in the lake.

Down at the barn, the girls were showing us how much they had improved in the past week. Nobody forgot how to ride over the weekend and they’ve all showed an incredible amount of progress. Some groups with more advanced riders, and returning campers, even got to do their first trot today! Other groups are focusing more on mastering the walk and then will work on more patterns and walking exercise before they move onto mastering the trot.

Tonight’s evening program was a game called Wells Fargo. We played with Forest (boys ages 10-11), and PokeyTotem (boys and girls age 7-9). Wells Fargo was a combination of capture the flag and freeze tag. The girls used their energy running around the field tagging each other and running away. After Wells Fargo, we headed out to watch fireworks over the lake for the Fourth of July! Everyone loved the fireworks display! By the time we got back to the cabin, the girls were all exhausted and dozed off to sleep, almost immediately!