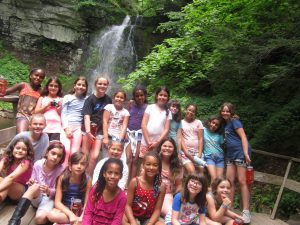 Yesterday, the girls started off with tye dye. They did spirals, polka-dots, bulls-eyes, and more! They all were so creative in their designs are are so excited to take the rubber band off of their shirts once the dye sets in. They have been constantly asking when the shirts will be ready so they can take a look at their designs.

Then we headed on a hike to a spot about a mile and a bit away from camp. They headed through the woods, in a different direction than they had gone on saturday, and went up to high falls! They went to the picturesque waterfall and go to enjoy the view and take a quick break before heading back down the mountain. They like the games we played on the way and challenged their minds with the riddles and tricks we told them on the way up and back down. They were ready to have a seat, take a big gulp of water, and rest by the time they got to lunch.

In the evening the had shower time and then headed to the gear room to do an activity with the trip center counselor. They played game where they each contributed to a line of a story and then they picked one to read aloud. As they read aloud, they had to figure out how to act it. They had jumbled up stories and the girls loved laughing at all of hte funny stories they created.

Today, the girls woke up and wished one of the campers Happy Birthday! They had all made cards for her and presented them right after they woke up! They were all excited for the day. First they headed to the Archery Range and they were able to all shoot bows and arrows! They tested their archery skills and some first timers even got bulls-eyes! Then they headed to waterfront and were super excited because they were able to go on the trampoline! There was finally enough water from the rain for the water to be deep enough for the trampoline to open! They were all so excited!!!

After the barn they went to hang out with some of the other campers from the younger part of Frost Valley, Wawayanda. They went to play in the field, on the basket ball courts, at the gaga pit, around the tether ball poles, and under the shady trees. They enjoyed being able to chill with other campers their age that they could meet and get to know.

For our evening program, we went down to the barn again! We went to go see the Staff Demo. A few of the staff prepared a riding routine to music and the girls and other villages on camp came down to watch. The staff made it look so easy riding along side each other and working as a team. They pranced around like a synchronized swimming team – not only controlling themselves, but the 1 ton animal they rode on! The girls were amazed to see how different the horses could be when staff rode. The staff rode some of the Mustang girl’s horses and it was very interesting for the girls to see what these horses could do with advanced riders and loads of hard work!