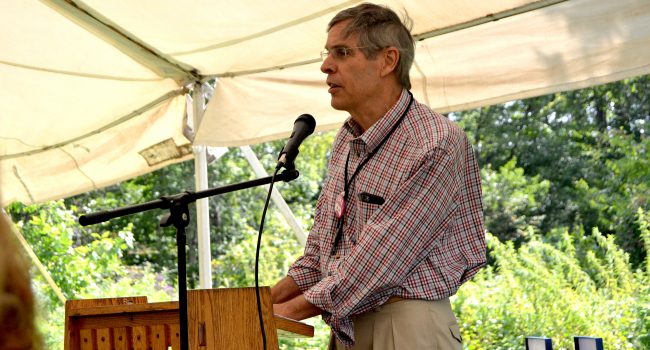 Here is the program note marking the awarding of the Eric Blum Award for volunteer of the year, 2017.

With his characteristic mix of drive and humor, decisiveness and self-effacement, Jim Vaughan, President of Frost Valley’s Board of Trustees, is the ideal volunteer. He devotes great measures of his time, resources, and attention to Frost Valley, and we suspect that a day doesn’t pass when Jim isn’t enthusing to others about our program, reaching out to prospective friends and collaborators, encouraging trustees’ increased engagement, or working with Jerry Huncosky and fellow board members on one vital issue or another. Our Volunteer of the Year for 2017 aptly is awarded to Frost Valley’s lead volunteer. “He isn’t just a volunteer,” says one trustee. “He models for all what voluntarism truly is.” 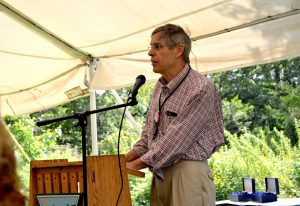 In his youth, Jim attended YMCA Camp Manito-wish in the wilderness of northern Wisconsin. He never forgot the powerful lessons he learned there—nor, over time, has felt any lessening of the Y’s impact on him as a person. When he moved to New York City, to join Cain Brothers, he quickly sensed that a life of business in the city would in itself leave him feeling incomplete. What was missing? He called the Y of the USA office in Chicago, and asked what he could do to pass forward his Manito-wish experience. The Y office gave him names of a few camps in his adopted metropolitan area. Fortunately for us, Frost Valley was among them. Jim contacted Halbe Brown, then CEO, who invited him to spend an autumn weekend talking about Frost Valley’s mission and values and touring the camp. “What was not to like?” Jim recalls with a grin. Two convergences helped tilt him in our direction. First, at a Wesleyan College reunion, he happened to stand in line at dinnertime with another alumnus, Mike Ketcham, who told Jim passionately about his Y career and his decades at Wawayanda and Frost Valley. Jim remembers thinking, of his encounter with Mike: “I should do something like that someday.” And back at Cain Brothers he had some business dealings with Dillon Read on Wall Street—an elite firm with perhaps not a great deal of camp spirit in the air. But there he met the enthusiastic and humane Fenn Putman, a our late board President and Jim’s predecessor; Fenn raved on and on about Frost Valley. These encounters, plus Halbe’s irresistible charm, and the obvious huge potential of Frost Valley, decided it for him. Soon after that fall visit he joined the Frost Valley Board. “I had been feeling like a slug in New York, not doing anything that was giving or good.” Now there would be good to be done aplenty, and constant opportunities for giving.

“Good” and “giving” are indeed words his trustee colleagues regularly used to describe him. “Jim is an inspiration,” Josh Tucker observes. “His dedication to Frost Valley shines through in every way.” “Being around Jim makes you want to do more, be more involved,” John McCabe notes. “He faces many challenges as President but always gets it done. He has a way of getting us to yes.” Jim himself describes the “Frost Valley magic” in a way that surely defines the powerful, effective combination of effects this award is meant to celebrate: “the simultaneity of being challenged and, at the same time, of being satisfied by helping others.”

Jim is explicit about what makes volunteering on behalf of Frost Valley so gratifying. The sheer joy of helping other people, helping children gain independence, helping families come together, helping to remove barriers that inhibit social equality, and create closeness among families. “Frost Valley could not be more effective,” Jim recently said, “in creating good people, good citizens, great families, and a myriad of opportunities for the development of good character in children.” From Manito-wish to Frost Valley, Jim Vaughan has led a life profoundly influenced by the Y, and thousands of people are the beneficiaries of his deep sense of the sheer power of giving, of selflessness, of philanthropy, of social conscience.