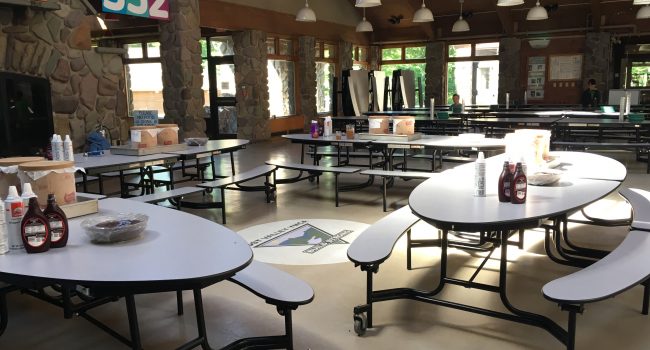 Yesterday was the first brunch of summer 2016. On Sundays each session, campers (and hopefully counselors!) get a chance to sleep in and go to brunch at 10am. Brunch is one of the most anticipated activities for campers, because during brunch campers are treated to the “Island of Dreams,” an ice cream sundae bar that accompanies waffles and other brunch options. It’s a great way to kick of Sundays, for Wawayanda brunch is followed by morning reflection. Morning reflection is a time where campers and staff perform songs and skits that go along with a theme selected by the counselors in training (CITs). Wawayanda’s morning reflection theme for this session was “covalent bonds”. After morning reflection cabin groups went back up to their villages for double rest hour, before heading down to the staff soccer game which is followed by the 1st session all camp activity, Small World. Small World is a culture sharing event where international staff members plan booths for campers to explore the food, music, and history of different countries. The afternoon was sunny but not too hot, perfect all camp weather! In addition to the booths at Small World, campers were able to try healthy snacks from our snack truck, cool off under the hose of a local firetruck, and play in our bouncy castle. 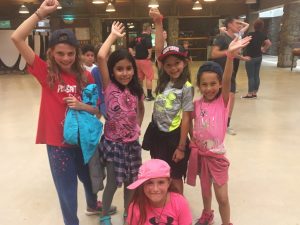 A rainy day at Frost Valley led to quality time spent in cabin groups. Susky village spent their evening performing lip-sync dances in their cabins meanwhile Lakota, Outpost, and Thunderbird competed in the classic evening activity Challenge Night. Pokey Totem finished up their day with a dance party in the dining hall (photo featured above). They definitely didn’t let the rain get them down! Tomorrow our one week village, Thunderbird, will be going out on overnights. Half of the village will be going to Nially’s Crossing while the other half will be at Moonshadow, two of our most scenic overnight sites! Check back tomorrow for more photos of Wawayanda fun! 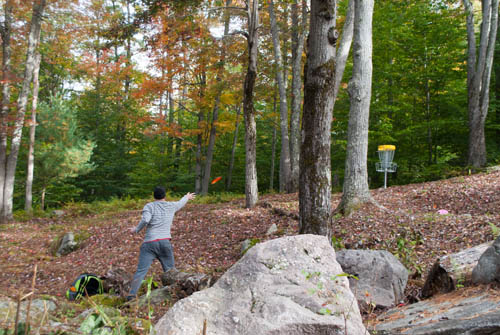 Frost Valley YMCA is excited to announce the opening of a new disc golf course designed by the award-winning John Houck of HouckDesign. The course, which is listed by the PDGA (Professional Disc Golf Association), was home to the recent Catskills Classic, a two-day disc golf tournament that took place over the weekend of October 3-4. The tournament brought approximately 25 players of varying skill levels to the Catskills. The same day, Frost Valley hosted workshops led by Houck on course design.

Disc golf is very similar to regular golf, but instead of hitting golf balls, players throw discs of varying weights and design in an attempt to land them in a basket at or below par. The Frost Valley course, which was designed to have minimal impact on its surrounding environment, features 18 holes in a fun and challenging layout that leads players through the scenic woods of the Catskills.

“We are very excited to be able to introduce a sport that is rapidly up and coming,” says Frost Valley’s Director of Operations Tom Holsapple. “This course is designed to be enjoyed by players of varying experience, from pros, to beginners, to individuals with disabilities.”

The course’s creation was made possible thanks to generous funding by the CVS Caremark Charitable Trust and can accommodate players of virtually any ability, from children with disabilities to lifelong, expert disc golfers. According to course designer John Houck: “The place and the people are just incredible. I’m not even sure what words I can use to describe the property, other than spectacular.” 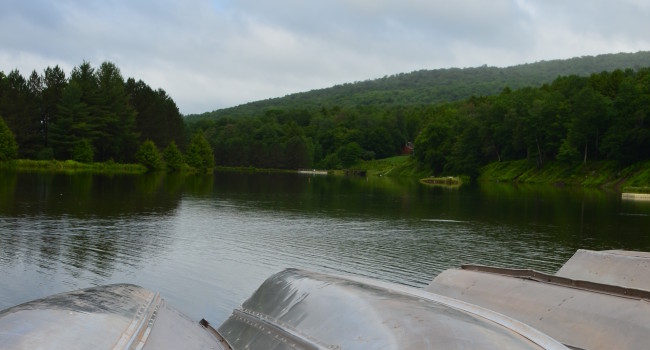 The lake is ready! 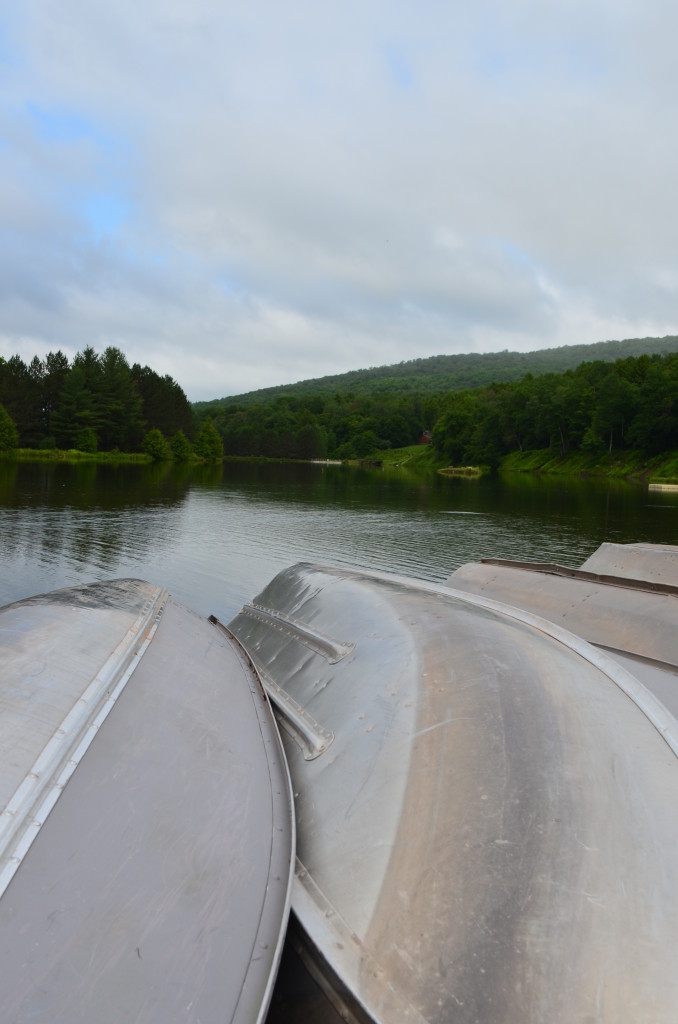 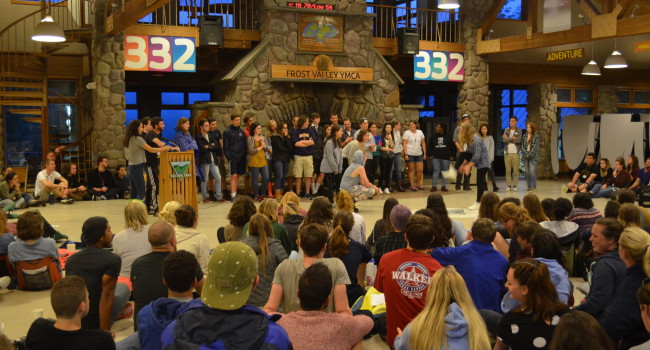 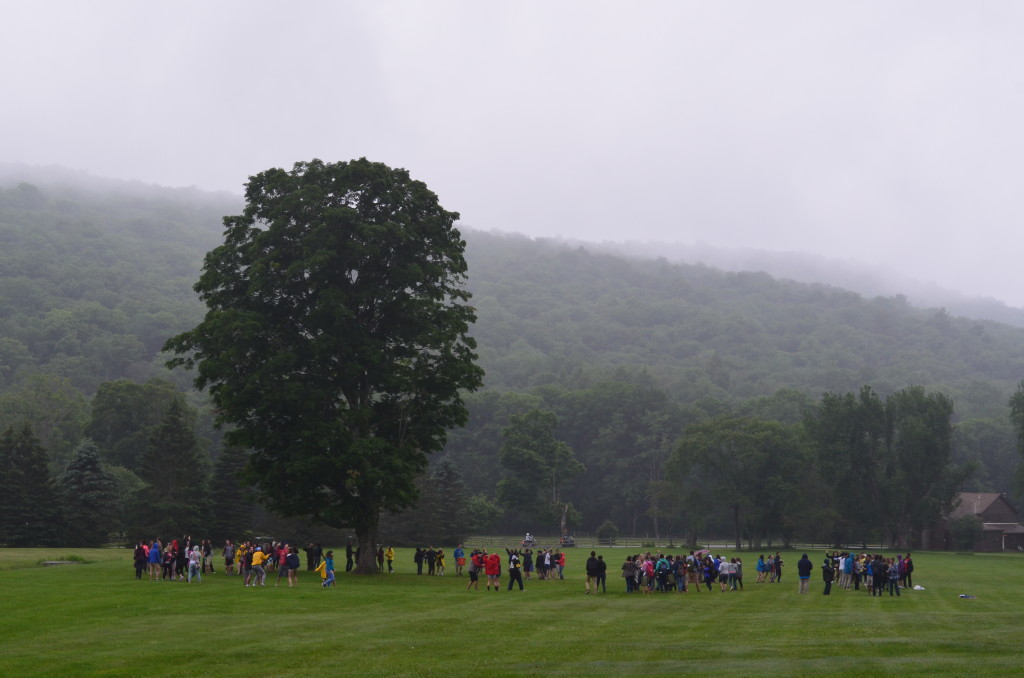 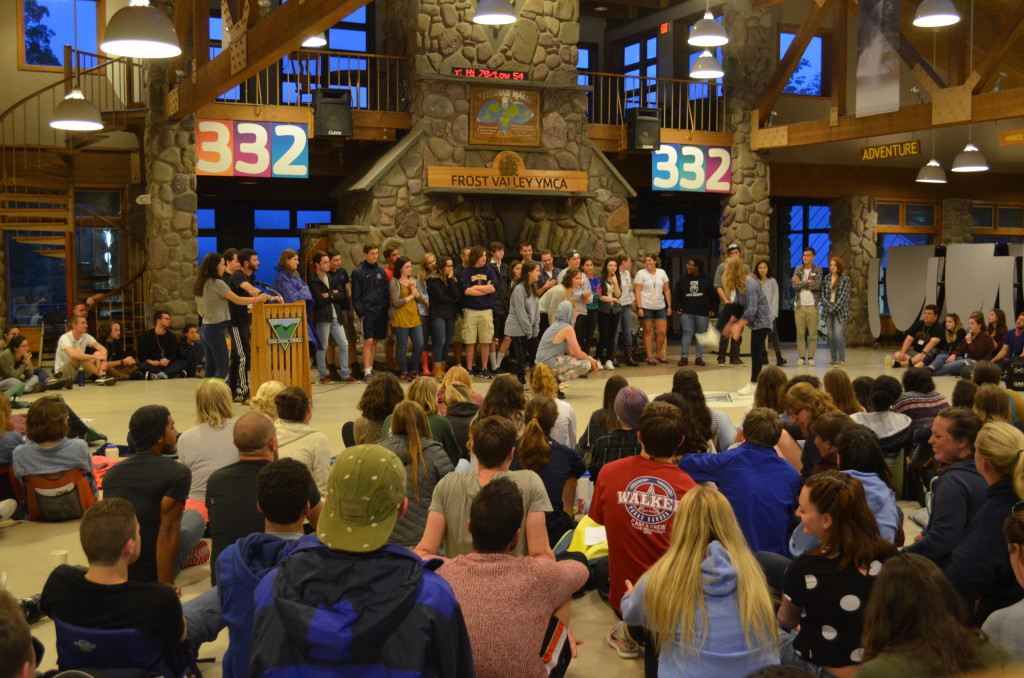 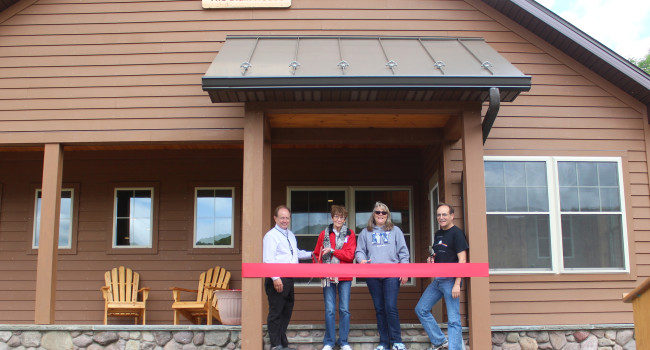 The Autism Speaks organization was founded in February 2005 and has grown into the world’s leading autism science and advocacy organization, dedicated to funding research into the causes, prevention, treatments and a cure for autism; increasing awareness of autism spectrum disorders; and advocating for the needs of individuals with autism and their families.

Frost Valley obtained this grant for the benefit of children with Autism Spectrum Disorder whose families would otherwise not be able to attend Day Camp. The funds have been given to families living in Sullivan, Delaware, and Ulster Counties for Summer 2015.

Under the leadership of the Day Camp Inclusion Director, experienced counselors work closely with children with physical and/or developmental disabilities to see that their needs are met. They provide campers with ample opportunities to experience the outdoors, create long-lasting friendships and participate in all activities in a beautiful, natural setting. 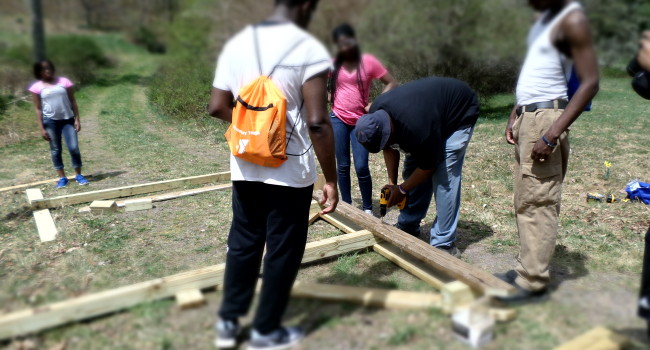 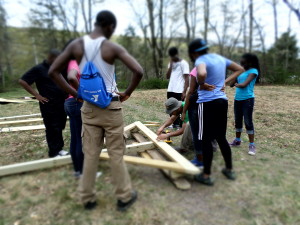 Here at Frost Valley, we work with a lot of schools during the week. In fact, we had 16 different groups just a couple of weeks ago! Sometimes we also get schools on weekends, and these are an added treat. Pathways College Preparatory School is located in St. Albans, Queens, and they brought 17 members of their Service Club up to Frost Valley this weekend. The teens are in 10th and 11th grades, and they enjoy giving back in the outdoors. This year’s big project took place in Rosendale, NY at Idlewild Park. The group did some cleaning, made trails, and helped prevent invasive species. Throughout the school year they also worked with City Harvest to provide meals during the Thanksgiving and Christmas holiday seasons, and with Red Cross on a regular basis.

Pathways College Preparatory School has visited Frost Valley twice before, and in the past their trip has focused on creating a learning experience and team-building. This year with The Service Club visiting, they wanted to focus more on giving back. Frost Valley Program Instructors Emily and Alex created an experience for the teens that was unique and got their hands dirty! Saturday morning the club worked with Emily to build water bars on our trails that prevent erosion. The teens told me that they learned a lot about preventing the trails from flooding, and when they finished, they looked at the water bars and said, “Wow, did we do that?”

After lunch, The Service Club met up with Alex to build a bird blind near a small pond hidden between the Archery Range and Lake Cole. A bird blind is a sheltered structure with small holes for binoculars. Avid birders can get inside to observe various birds up close, and the small pond attracts many different species. In the future, Alex hopes to add plants near the pond that will attract even more birds to the area. He also hopes to decorate the inside with information about identification.

Frost Valley YMCA would like to thank the Pathways College Preparatory School Service Club for all of their help this weekend. The next time you take a walk on our trails, look for their water bars. And very soon, the Bird Blind will be functional and ready to use. If you have a group looking to do a service project, please let us know. We would love to work with you! 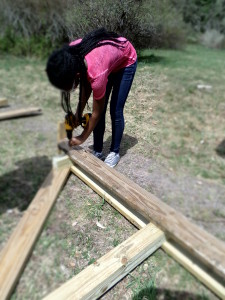 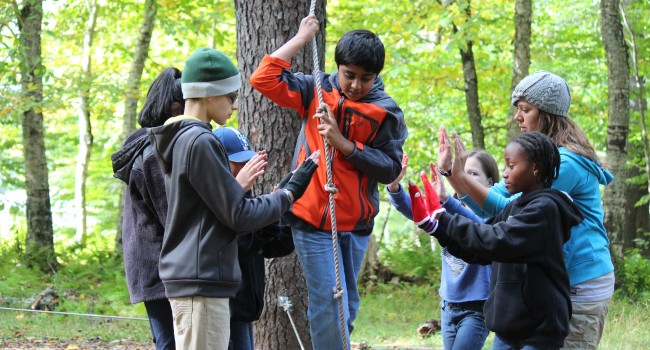 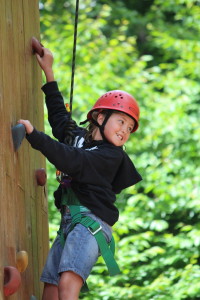 Last weekend Frost Valley YMCA hosted the New Canaan YMCA Adventure Guides and Princesses. This group of dads and their children take trips throughout the year, but their spring camp-out here is always a favorite. Adventures Guides and Princesses is a national YMCA program focused on parents spending quality time with their children. One of the goals is for families to do things together that are unique and make long-lasting memories. Additionally, dads share social camaraderie, and their children gain life-long friends.

The New Canaan YMCA Adventure Guides and Princesses take trips throughout the year, including day trips such as bowling and picnics and camp-outs at various YMCAs. Heading the program is Davie Cedela, who has gone on 31 outings. She most enjoys watching the dads interact with their kids and get out of their comfort zones. These are dads who play Gaga, run around the fields, and paint their faces – all for the love of their children.

New Canaan YMCA dad Paul B. was a part of the Adventure Guides and Princesses when his 32 year-old daughter was young. Now he does the program with his 7 year-old son and 12 and 10 year-old sons. It’s a long-standing family tradition that he enjoys being part of.

Each spring new Canaan YMCA chooses Frost Valley for their spring camp-out. Davie says that she never hears complaints about the activities, because there is so much to choose from. There are also many activities that dads and their children can do on their own. If you would like more information about the Adventure Guides and Princesses program, contact your local YMCA. We proudly host many weekends for the program throughout the year. 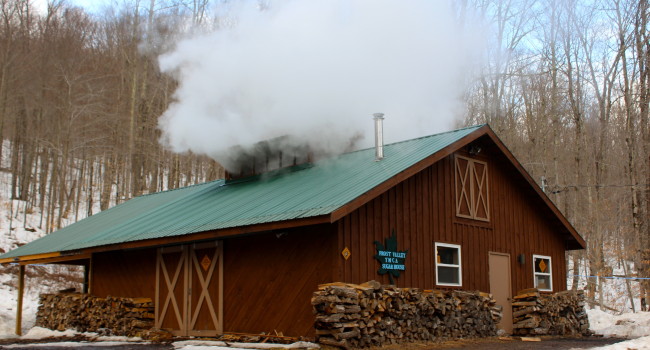 Frost Valley YMCA’s free annual Maple Sugaring Open House Weekends brought scores of people to the Catskills to learn all about how maple syrup is made.

The event took place during the weekends of March 20-21 and March 28-29, just as the sugar maple trees began to thaw in our region. Due to colder weather, there wasn’t much sap available during the first weekend, however, guests were still able to learn about the entire tap-to-table process. During an educational walk, staff members from Frost Valley’s Natural Resources department taught families how to identify sugar maple trees, which only grow in northeast North America. They were allowed to walk through the Sap House and see the evaporator that boils sap as part of the process, as well as learn about tapping trees. At the end of the tour, guests were allowed to taste a sample of Frost Valley’s fresh maple syrup.

“Frost Valley has been maple sugaring since the late 1970s, and what started as just a humble operation — gathering sap in just a few hundred buckets — has now grown into a full-fledged tradition and fun learning opportunity,” says Heather Bowman, Director of Natural Resources. “Today, we have more than 1,200 taps in sugar maple trees, and thanks to a tubing system, we can now collect and store larger amounts of sap to be transformed into our delicious, Catskills syrup.”

This article originally appeared in the Tri-Valley Townsman, 2015.