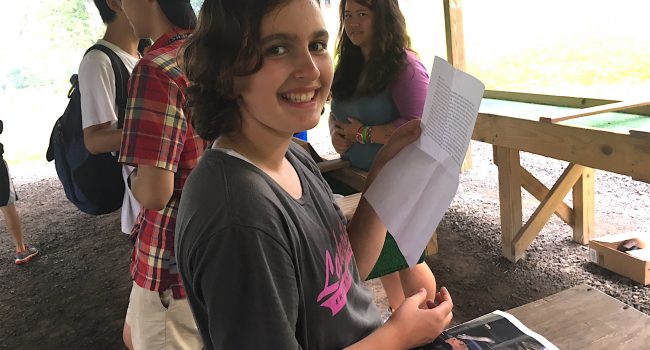 A letter from home (from alumnus grandpa) 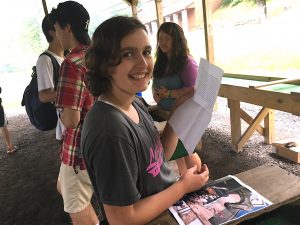 Sunny gets a letter from home. She’s been coming to camp for a few years and now is in Lakota, and having a fabulous time — making new friends, renewing friendships from her Susky summer, learning the inherent goodness of hanging out under the Halbe & Jane Brown Pavilion before dinner. But wait. This isn’t just your ordinary camp letter. It’s a letter (and photograph) from Sunny’s grandfather. And Sunny’s grandfather is…a mythological figure at Frost Valley: John Giannotti. The John Giannotti. John came to FV first in 1969 — and that summer, with Jack Starmer, created the all-camp program called “Hirdstock.” (Yes, Hirdstock was founded during the summer of the Woodstock concert.) John was the Arts & Crafts director, later the Camp Hird director, and held pretty much every position up and down the ranks. He had (and has) a legendary talent for relating to kids. His three children, Oran, Keara & Dani, all grew up at Frost Valley, and all three became staff members in their own right. Oran’s daughter, one of John’s grandchildren, will come to came as a CIT during the second half of the summer. And Sunny is Keara’s daughter. Generations of Giannottis.

John’s letter to Sunny (as Sunny read aloud to me) makes some wisecrack about how old I am (I, the personal deliverer of the letter). I don’t mind — since John is still older than I. But we “old” FV people have the great, great pleasure to seeing generations of campers and staff give way to the next, and the next, and the next. Earlier in this blog I posted a photo of all the campers and staff whose parents or grandparents were themselves campers or staff. It was a huge number of people! As we add many new campers to the summer camp family, we also keep the decades of relationships. It’s just a great combination.